Gaming phone put to the test in Diablo Immortal

June 9, 2022 Other Comments Off on Gaming phone put to the test in Diablo Immortal

With the ROG Phone 5s, Asus provided us with a gaming smartphone, which I put through an endurance test in Diablo Immortal. While playing on my smartphone with the optional gamepad, I noticed many positive as well as negative features of this “mobile console”. I’ll tell you what it was in the field report.

First of all: This is not a classic test that covers all aspects of the Asus ROG Phone 5s. I’m just focusing on the gaming capabilities that set the phone apart from other models. Also, I almost exclusively played Diablo Immortal.

The Asus ROG Phone 5s isn’t the newest smartphone on the market, but it does have some special features. For example, the 144Hz screen that makes games even more immersive. It’s a shame that I couldn’t use Diablo Immortal to its full potential because the game is locked at 60Hz. In all I was won over by the 6.78-inch AMOLED screen. It’s crisp, bright and has a great display. But it is very sensitive to dirt. I don’t know this from my Pixel 6 Pro. For me, the screen could be even bigger for gaming.

ROG Phone 5s is equipped with the Snapdragon 888+, 16 GB of RAM and 512 GB of internal storage be available. So you have plenty of storage space for games. It’s a shame that the Asus phone still runs Android 11 today. Considering Android 13 is just around the corner, that’s a real downside. But I like the surface, because you can access settings that are particularly important for gaming with a swipe, making it easy to change the screen brightness, for example.Battery life is impressive when gaming

The ROG Phone 5s battery measures 2x 3,000 mAh and therefore 6,000 mAh. In Diablo Immortal I have one 4 hour playtime at highest settings and relatively high brightness achieved. The game is quite dark, so I had to turn up the brightness to the maximum in the garden. But then it’s good to be able to play. No other mobile console can do more. Asus is therefore well on board here. If you’re playing in the apartment with lower light, you’ll get slightly longer runtimes.

If you connect the optional gamepad, the USB-C socket is blocked and Asus has not installed a second connection on the controller. I don’t think it’s very well thought out if you have to completely remove the cell phone from the holder after four hours and plug it into a power supply. There should have been an external charging option during gameplay.

Of the The joystick controller convinced me a lot. Diablo Immortal’s touch controls are very good, but my hands still feel cramped when playing for a long time. This doesn’t happen with the gamepad controller. I was able to play for several hours and had virtually no inconvenience – at least almost. After about two to three hours of play I noticed that some of the shoulder buttons weren’t responding as quickly as they used to. Attacks were sometimes not carried out. It is of course boring when it comes to serious things.

Plus it pissed me off. the controller turns off much too quickly. I couldn’t get it to work without using the Switch with the Bluetooth connection or removing the phone from the mount. This is how the connection to the USB-C port was cut and restored. Why is it not enough to press a button on the controller? Maybe it’s a security mechanism for transport.

Overall, the concept with the pluggable game controller convinced me so much that I ordered the Razer Kishi for my mobile phone (check it on Amazon). I want to keep playing Diablo Immortal with this when the Asus ROG Phone 5s has to go back. The Asus controller can also be connected to your smartphone or tablet via Bluetooth. Thus, you can turn your Android device into a small game console. Non-Asus smartphones cannot be connected because the USB port is not in the middle.

Does a gaming smartphone like the Asus ROG Phone 5s make sense? 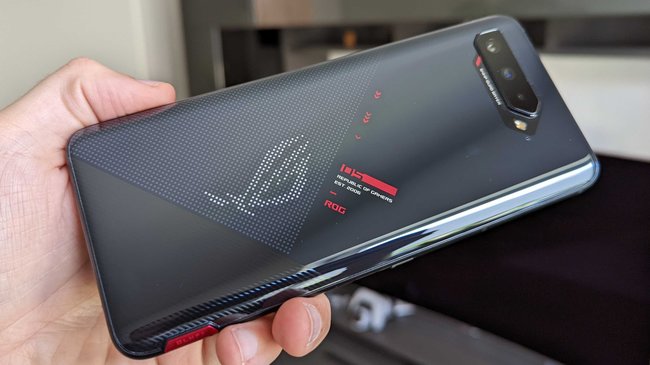 Until recently I would have said no, because you can also just buy a controller for your normal smartphone. The Asus ROG Phone 5s offers added value when gaming with its fast display, high performance, big battery, plenty of memory and the right software. So if you play primarily on mobile and enjoy using a controller, then you can use a gaming smartphone like the Asus ROG Phone 5s. In normal everyday life, however, you have to live with drawbacks such as a weaker camera.

The Asus phone is perfect for Diablo Immortal and I quickly found myself at level 60. At over 1000 euros (see Amazon), the cell phone also costs a lot more than a Nintendo Switch (see Amazon). And you don’t need high performance for Diablo. I think a Samsung Galaxy A53 with the Razer Kishi Controller would also do the trick. But it is no longer a gaming smartphone. At Asus you get the accessories specially optimized for the smartphone. This includes the game controller or a fan. Everything fits and works here.

A few words about Diablo Immortal

Diablo Immortal is rightly criticized for the Pay2Win issue. Those who are prone to gambling should definitely not play the game. There are simply too many temptations in the game to “enhance” the gaming experience with small and then large amounts. Diablo Immortal as a game itself is great, but it’s just marred by microtransactions. I only got the small Battle Pass at 4.99 euros because I still had one euro of credit left in the Play Store. But I won’t spend more and as a big fan of Diablo game series, I hope Diablo 4 won’t be a Pay2Win game.

As a curmudgeon, I’d rather play for hundreds of hours to get something anyway, and see that as an added challenge to compete with players who’ve spent hundreds of dollars in the game. But I’m also aware that this means that I will never be able to use the full potential of the game and that I will not be able to keep up with players who have spent a lot of money for the foreseeable future. But that doesn’t bother me either, because if the difference with other players becomes too big, I just quit. As in many other games – like Lost Ark before it – I don’t regret having spent several hundred euros for a game that I no longer play.